The Misconception about "Just Feeling It"

The phrase “Just feel it” has been around for ages in guitar music. This phrase is apparently meant to just let your mind go and just play. The common understanding behind this phrase is if you let yourself go and just don’t think, you’ll play better. 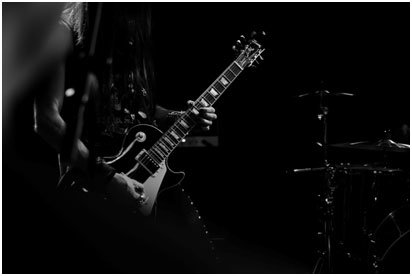 Now before I go on, let me say that I disagree with the common usage of the phrase but there are parts of the phrase that I believe uncover a hidden truth behind improvisation.

As a student I found this phrase to be ambiguous. What does “feeling it” even mean. It has no clear meaning and I wasn’t sure what I was trying to do. It felt like my teacher didn’t have an answer but didn’t want to say so. It reminded me of times when I was learning basic technical skills and their only advice was just play it over again. I don’t even know what to fix. I wanted a clear understanding of what was wrong so I could fix it. To me, this “just feel it” phenomenon just meant my teacher didn’t have the skills to teach me.

“Just feeling it” creates an interesting problem for a lot of intermediate and lower level guitar players. When they think “Just feel it”, they stop thinking. What these guitar players end up doing is simply just moving their fingers and pausing at random points. There’s not a lot of inspiration involved in their musical phrases. They sound, for the most part the same and it gets boring to listen to them play. After a while they get bored of playing. Just feel it, does little to help them execute on new ideas and creates a bunch of default phrases they come back to time and time again. Yet at the same time, these same players use “Just Feel It” as an excuse not to learn common music skills like rhythm, scales or chords structures.

The "just feel it” phrase makes the player stop thinking so much. This makes them rely on what they have truly mastered, the skills that take very little thought to execute because you’ve trained them so much.

For many beginners and supposed intermediate/advanced players (debateable) who thought “Just Feel IT” meant you don’t need to learn crucial musical skills. The only skills these players had down were moving their fingers around common patterns, licks and scales, If they were lucky. For the rest, it meant being doomed to be stuck in the minor pentatonic box for life.

The point I’m trying to make is that in improvisation(at least in a performance setting), you need to rely on mastered skills. Those mastered skills should involve more than just one scale pattern or some pentatonic since there are many other musical skills. Part training, visualization, phrasing, rhythmic skills ect. If mastered these skills should be second nature. Meaning you execute them with only a split second of thought.

I would like to point out before moving on, that there is merit jamming with friends on skills you don’t have totally perfected if you’re:

Just realize you won’t be able to really freely use these skills until they’re mastered and integrated with your other skills.

Back to “Just Feel It”

So In my own opinion, I would assume that “Just Feel It” works for some players because it allows them to focus on what they’ve mastered. The issue and problem with “Just Feel It” lies in students belief that just feel it means don’t think. The two phrases have nothing to do with one another and are not synonymous. When you’re playing guitar you’re thinking, so you might as well learn to use all your options not just one.

For instructors teaching beginners and intermediates, a lot of them shut their brain off completely and just let their fingers go at it. If we’re going to use the phrase “Just Feel It “, you must inform your students “just feel it” is no excuse not to think. It’s just a reminder to remain in the areas you have mastered.

About the Author: Chris Glyde is a guitar teach who is constantly looking for better ways to play the guitar. If you’ve enjoyed this article or have some questions that need clarifying, contact Chris through his Guitar Lessons page.